Amhara Association of America Response to Secretary Blinken’s May 15, 2021 Statement on the Conflict in Tigray Region of Ethiopia

Among other concerns about the humanitarian situation related to the ongoing war in Tigray, Secretary
Blinken writes:

AAA feels it necessary to respond to several aspects of Sec. Blinken’s statement, including the political
administration of Welkait (“Western Tigray”) and the conduct of armed belligerents in Tigray.1 In
addition, AAA must also address the lack of a comprehensive American policy or concern towards
Ethiopia’s internal crises beyond Tigray Region– particularly regarding atrocities committed against
ethnic Amharas.

Secretary Blinken’s May 15, 2021 statement is not the first time that he has demanded that Amhar
regional forces leave Welkait an area TPLF annexed from Gondar Province in the 1980s, but it is the first
time that he has explicitly endorsed the political administration of Welkait by the Tigray Region. For
multiple reasons, AAA is disappointed by Secretary Blinken’s declaration.

First, the Secretary’s statement negates the fact that Welkait is being administered by people selected
from the local population. Secondly, the Secretary’s repeated statements on Welkait betray either an
ignorance of, or unwillingness to acknowledge, the numerous human rights abuses against the Amharas
of Welkait when it was under the Tigray People’s Liberation Front (TPLF) control from the late 1980s to
November 2020. The full details of this history, which include what AAA believes amounted to acts of
ethnic cleansing, can be found in AAA’s March 2, 2021 statement.

For years, Amharas petitioned the TPLF-controlled Tigray Regional Government, the TPLF-dominated
federal government of Ethiopia, and international agencies and organizations to address these
grievances. While the TPLF’s steadfast refusal to allow for the equal protection of rights in Welkait was no surprise, sadly, the United States showed no interest in investigating or condemning these injustices
when the TPLF was in power.

no surprise, sadly, the United States showed no interest in investigating or condemning these injustices
when the TPLF was in power.

Conduct of Armed Belligerents in the Conflict

While AAA finds Ethiopia’s military response to the TPLF’s November 4, 2020 attacks on the Northern
Command justified and necessary, that cannot give the Ethiopian forces and Eritrean Defense Forces
(EDF) cart blanche to violate the human rights of Tigrayan civilians. As we wrote in our March 2, 2021
public statement :

AAA, its members, and its broader support base vehemently oppose any actions – either in
isolated incidents or as part of a systematic campaign – that harm or threaten to harm Ethiopian
civilians of any ethnic background. As Amharas have recently suffered multiple, targeted ethnic
massacres in Mai Kadra, Oromia, Metekel, and Guraferda, we would never wish a similar fate
upon any other group. We condemn any actions by military forces or militias that have resulted
in injured or killed civilians, stolen or damaged property, or expulsion from homes.

In the following weeks, several reports from humanitarian organizations on the ground and journalists
have documented continued atrocities against civilians in Tigray Region by both Ethiopian forces and the
EDF. These recent reports by human rights organizations – including the EHRC – and multiple media
outlets on the massacres of unarmed Tigrayan civilians, including in churches, should horrify all
Ethiopians, regardless of ethnicity or religion. AAA condemns these alleged atrocities by both Ethiopian
forces and the EDF, along with the widespread accounts of abhorrent sexual violence against Tigrayan
women, the blocking of humanitarian aid distribution, and the looting of civilians’ property, among
other human rights abuses and atrocities.

Some of the reports from humanitarian organizations on the ground and journalists accused Amhara
regional forces being involved in the mass displacement of ethnic Tigrayans from Welkait. Tigrayans
claim that Amhara forces subjected them to violence, persecution, and looting of properties to pressure
them into fleeing eastward. Some Tigrayan women also report sexual violence and rape at the hands of
Amhara fighters in Welkait, and reporting that Amhara regional forces have blocked the distribution of
humanitarian aid to Tigrayans. AAA recognizes that the historical ethnic cleansing, violence,
discrimination, and persecution against Amharas from Welkait by the TPLF cannot be avenged by a
contemporary violation of rights of Tigrayans who live there now. Once again, we reiterate our forceful
condemnation of atrocities committed against Tigrayan civilians and anyone in Ethiopia. AAA
unequivocally joins Secretary Blinken in calling for accountability for all crimes against civilians in
Ethiopia, including in Tigray Region.

We are also concerned that the State Department has not called out the TPLF’s continuing conduct that violates international humanitarian norms and the law of war. This includes the TPLF’s recent attack in the Wag Hemra Zone of the Amhara Region that killed multiple civilians. We call on Secretary Blinken to condemn the TPLF for its attack against civilians and the November 4, 2020 attacks on the ENDF, urge the TPLF to cease its armed resistance, and to allow full humanitarian access to Tigrayans in the areas it controls.
Again, we call on all belligerents to abide by international humanitarian norms and the law of war, allow full, unfettered access to humanitarian assistance by the international community, and permit independent media access and ground investigations of all alleged atrocities by the appropriate international bodies. As an important step towards the goal of accountability and bring the perpetrators to justice, AAA supports the joint UN-Ethiopian Human Rights Commission (EHRC) investigation of all reported human rights abuses, including those perpetrated by the TPLF. We also support the recent call by the US Senate Foreign Affairs Committee to extend the UN-EHRC joint investigation to other regions particularly in Oromia and Benishangul Gumuz regions where we have extensively documented crimes against humanity and ethnic cleansing against Amharas.

The United States’ Unwillingness to Acknowledge the Ethnic Cleansing of Amharas Across Ethiopia
AAA estimates that from June 29, 2020 to April 30, 2021, a minimum of 1,998 Amhara civilians were
slaughtered in dozens of attacks across the country, and a minimum of 800,000 Amharas were internally
displaced or sought refuge in Sudan due to these massacres. For months, AAA has regularly informed Members of Congress about the ongoing ethnic cleansing of Amhara civilians in multiple parts of Ethiopia. This advocacy has borne success with recent public actions, such as the joint letter from five Democratic Senators and the joint statement from the bipartisan leaders of the House Foreign Affairs Committee.

Unfortunately, to this day neither Secretary Blinken, the United States Embassy in Addis Ababa, the
United States Ambassador to the United Nations, nor any other relevant American official have
commented on these atrocities beyond a couple of vague, short statements acknowledging “ethnic
tensions” in the country. Our attempts to discuss this crisis, along with other severe human rights issues
occurring outside the Tigray Region for other Ethiopians, with relevant officials at the State Department
have been met with silence.

While it may not be Secretary Blinken’s intent, the continued ignoring of atrocities against Amharas
within and outside Tigray Region leaves AAA with the impression that Amhara lives do not matter to the
State Department. This is bolstered by the repeated pronouncements about Amhara regional forces in
Welkait – the only context the State Department has even said the word “Amhara.”

Therefore, AAA calls on the State Department to acknowledge and condemn the human rights
atrocities that have been committed against Amharas, including in Mai Kadra, since last summer. We also urge the State Department to support comprehensive, independent human rights investigations in all areas of Ethiopia where Amharas have been targeted for slaughter, along with conflict zones for Ethiopia’s other ethnic groups.

AAA welcomes the opportunity to discuss these issues further with Secretary Blinken or other relevant
officials at the State Department. Finally, AAA supports calls for an inclusive, national dialogue
representing all of Ethiopia’s ethnic and religious communities to discuss common ground for systemic
reforms to the country’s ethnic-based governing institutions. We feel these institutions and the
governing philosophy of ethnic federalism are at the heart of the multiple crises facing Ethiopia.
Media Contact:

About AAA: The Amhara Association of America (AAA) is a nonprofit organization that represents the
Ethiopian Amhara diaspora in the United States. Visit www.amharaamerica.org for more information. 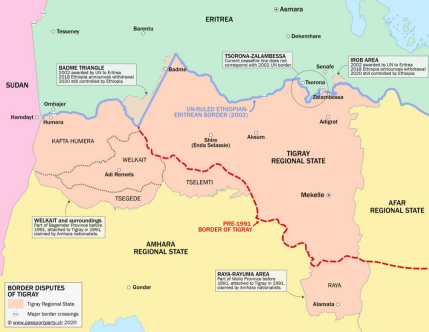